There have been numerous articles exploring the benefits of charter.

There have been innumerable cases of management companies telling owners and potential owners that they will “make money” owning and chartering a jet.

In this article we will review a client case where we studied the true marginal return of chartering, explore the “make money” assertion, and analyze the situations when operating Part 135, in a charter environment truly makes sense.

The Client Case:  To Charter or Not to Charter

Recently, we were approached by a long-time client who owns a Challenger 604.  The client was approached out of the blue by an aggressive management operation, offering to manage the client’s aircraft, put it on a Part 135 certificate and to hold it out to third-party users of the aircraft.  The manager provided a very detailed operating proforma showing the “profits” that the client would make, along with a slick brochure indicating that the aircraft would “pay for itself”.

We recommended to the client that we perform a true “Margin Analysis” based on a per-hour return.  In the analysis, we assumed three-hundred charter hours per year.  We factored in the Charter Revenue and Fuel Surcharge, along with the Direct Operating Costs and brokerage Fees for the aircraft.  In addition, we factored in non-cash costs associated with each hour of flying, including: 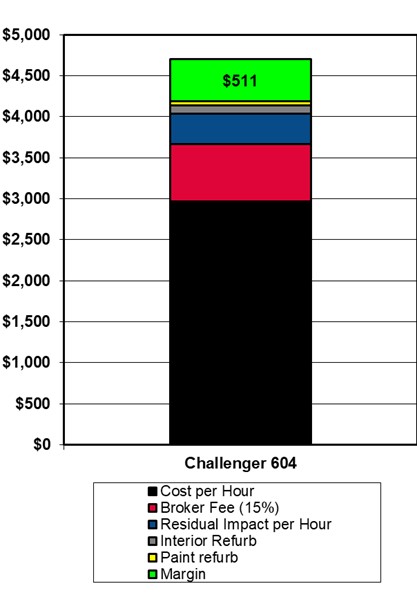 As part of the analysis, we did not factor in any costs relative to fixed maintenance for the aircraft, including the 96 Month Inspection, lesser inspections, gear overhaul, etc.

As a net result, the client would receive Five-Hundred Eleven ($511) Dollars per hour of net charter margin, or $153,300 on an annual basis.  When compared to the owner’s fixed cost of operations, approximately $600,000 annually, the charter margin offset approximately one-quarter of the fixed costs.  When factoring capital (or a better analysis of residual value loss), chartering does not come close to “making money”

As you can imagine, Mente Group is often asked to study charter as a way to “have the aircraft pay for itself”.  We’ve run hundreds of scenarios.  Most typically, we will be asked to review 150-250 hours of owner usage, augmented with 100-200 hours of third-party charter.  The findings generally point to the same conclusion.  Under most usage patterns, we’ve found that, at best, chartering your aircraft helps to offset the fixed cost burden of the aircraft.

So, you’re probably asking, “at what point does charter pay for the plane?”  We’ve done the analysis.  But, before we go to the answer, you must remember that as utilization increases, pilot staffing needs to increase as well.  So, based on the findings, a 4.5 pilot organization, flying 100 owner hours a year and 700-750 hours of charter comes close to covering the owner’s usage and covering the fixed costs.  (it still won’t cover the major fixed maintenance inspections.)  Not until you approach 1000-1200 hours of charter alone (depending on aircraft type) do you approach break even. To approach this level of utilization, along with the increased crewing requirements, your airplane must ‘float’ becoming nomadic without a traditional home base or hangar.  Additionally, your aircraft becomes part of the wholesale market, with a client base focused on the lowest price, not the best aircraft.  Clearly, it is very difficult under normal operations to ever make money chartering an aircraft.

As we’ve worked with clients all over the US, we’ve come across several situations where chartering does make sense:

Obviously, the decision to hold-out your aircraft for charter is a complex decision.  In many ways, it can simplify operations and reduce the cost of ownership, but there’s no way to eliminate it.  Much like renting out your vacation home, once you make the purchase decision, you can consider whether you want to rent it out to offset some of your costs.  But it won’t pay for the asset – including capital and operating expenses – much less make money.  Otherwise, we’d all own money-making charter airplanes as part of our investment portfolio.  And we don’t.  Feel free to reach out to the team at Mente and we can help you explore this topic in greater detail.

You can reach a Managing Director listed below that serves your area.